*This review was originally posted at Hello Cinema. 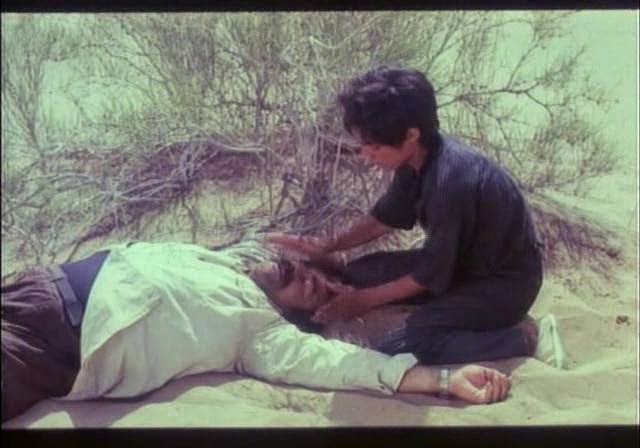 Majid Majidi started his film career as an actor in the 1980s, with secondary roles in a range of films including Mohsen Makhmalbaf’s Boycott (Baykot, 1985). Because of his limited roles, it was hard to envision then that he would go on to become one of Iran’s most renowned filmmakers. Yet, Majidi established himself as a vital voice when his second feature, The Father, won the top prize at the Fajr Film Festival.

The Father centres on Mehrollah (Hassan Sadeghi), a fourteen-year-old boy who has recently been involved in a motorcycle accident which killed his father. Majidi communicates the details of the death in the opening sequence with an affecting shot-reverse-shot that shows Mehrollah longingly looking at a picture of himself and his father on the road. This scene is the first example of Majidi’s visual approach to storytelling in The Father, a film in which dialogue is used minimally for the purpose of exposition. Gestures, gazes and the mood that the mise-en-scène evokes convey plot points. Assisted by the percussive regional music, the rough, sunburnt setting of the barren Iranian South creates an aggressive atmosphere and externalizes the internal turmoil of the film’s young hero after his traumatic experience.

Mehrollah works in a city near his village to provide for his mother (Parivash Nazarieh) and three sisters. He is audacious and wise beyond his years but only shows his limitless rage and stubbornness upon returning home, when he learns of his mother’s remarriage. His stepfather (Mohammad Kasebi) is a gendarme in the local police force, a respected lawman who, despite his imposing figure, shows immense compassion toward Mehrollah’s sisters.

Mehrollah is incensed at the “replacement” of his father and confronts his mother. Majidi exaggerates Mehrollah’s response to the marriage through his choice of profession for the stepfather: the young boy appears all the more rebellious since standing tall against the gendarme constitutes his disregard for the law itself. Mehrollah’s hostility toward his stepfather manifests itself in different ways and eventually leads him to escape the village. His stepfather tracks him down, but the two men are stranded and hit by a sandstorm on their way back home. Their journey together forms the entirety of The Father’s final act.

Majidi examined wildly different issues within the paradigm of children’s stories in his first four features. The Father is ostensibly about the lack of empathy in adults for adolescents during their sensitive, formative years. Mehrollah’s increasingly violent behaviour is shrugged off and he is repeatedly told to just get on with it, a mistreatment of mental issues in young adults that is unfortunately prevalent in rural Iran. Yet, while Majidi exposes this problem, he doesn’t quite explore it. It is a behaviour that simply exists and is accepted by the film. The lack of commentary by The Father in this regard, coupled with a finale that resolves the boy’s problems by brushing them under the rug does little to suggest Majidi understands this social phenomenon more than the people whose story he is telling.

On the other hand, the director subtly criticizes the patriarchal traditions of Southern Iran. The film suggests that Mehrollah’s reactionary approach to the marriage isn’t simply a case of post-traumatic distress, but also a consequence of deep-rooted conventions that the community at large hasn’t addressed. The misogynistic mentality is exposed during a physical altercation between the boy and his mother. Mehrollah, believing money to be the only motive, insultingly demands an explanation from her for marrying without his permission, a common expectation in Islamicized rural areas. In response, she relates that the murmurs and looks aimed at her after the death of her first husband had become overbearing, uncovering an unfortunate facet of Islamic societies’ attitude toward widowed women: they are properties to be reclaimed. The mother objects to this norm but remains sadly powerless against the patriarchal society, as even her son questions her autonomy over her own life.

The above sequence explicitly visualizes this chauvinistic mentality and the film’s observations about the role of patriarchy in the Iranian social consciousness are repeated throughout the film’s final act, during which the tension between Mehrollah and his stepfather increases as they trudge through the desert. Majidi assures us that a bond is forming between the two men. The clues are both visual (one particular shot of them handcuffed together looks deceptively like a father holding his son’s hand) and written in the text (the stepfather picks Mehrollah up where his father left him, on a motorcycle in the wilderness).

When the finale arrives, however, it only undermines the film’s structure. The final shot actualizes the inevitable bonding, while remaining coy about the outcome of the two men’s quest for survival, an ending that is a misguided attempt at bringing emotional closure to a story that doesn’t need one. Majidi forgoes all sense of mystery in favour of a single, aesthetically pleasing image, too calculated to move the audience or leave them with much to ponder. This ending is a testament to Majidi’s deft hand at constructing poetic images and finding the sensational in the mundane, but the full emotional force of such picturesque compositions would only begin to be realized in his next film, Children of Heaven (Bacheha-ye Asemaan, 1997).
Posted by Amir at 2:29 PM