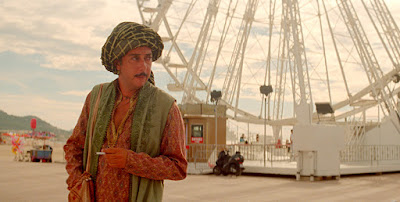 Offside (Panahi, 2006, 7.7)
The Circle, but this time disguised as light-hearted fun. Offside is deceptively simple but incredibly dense and rewarding on repeat screenings, and it is as clever about women's second class status in Iranian society as it is about the fervor with which Iranians worship football.

Crimson Gold (Panahi, 2003, 7.8)
One of Panahi's more confrontational films. This is a harsh and sharp critique of the ever-expanding gap between social classes in Iran and its catastrophic socio-cultural effects. Written by his mentor Abbas Kiarostami, Crimson Gold is a formally rigorous and emotionally overwhelming experience.

Ice Age (Kiayi, 2015, 5.6)
Needlessly convoluted plotting and a ludicrously melodramatic ending sour an otherwise entertaining experience. Kiayi's film plunges the audience into modern Tehran's casual drug problem   and "morality crisis   but it's a shame he can't contain his crowd-pleasing tendencies in favour of a subtler approach.

Embrace of the Serpent (Guerra, 2015, 6.4)
All the ingredients of a profound experience, but a total lack of dramatic tension. Looks stunning though!

Arabian Nights: Volumes 1-3 (Gomes, 2015, 9.5)
A flawless, towering, transcendent epic. It sounds reductive to put it in words, but this is a major masterpiece.

Much Loved (Ayouch, 2015, 7.8) (review)
"It’s intimate and superbly acted—mostly by amateur performers— and a film that's heartbreaking, humorous and evocative in equal measure. In a festival that is never short on big films from big directors, Much Loved was a true discovery."

Story of Judas (Ameur-Zaïmeche, 2015, 7.1)
Not sure it says anything about Jesus's life that we haven't seen before but it's gorgeous and I liked it!

Taxi (Panahi, 2015, 7.0) (review)
"This is one of Panahi’s most accessible films, consistently funny and engaging, and heartwarming, for showing the director in high spirits after the troubles of the past few years. Yet, the complexity and subtlety, the sly sociopolitical commentary seem absent in Taxi."

Victoria (Schipper, 2015, 8.5)
Staggering craft is immediately obvious; thematic complexity is revealed in layers. Seamless marriage of form and content. Performances are impossibly measured and powerful. Even within the non-stop structure, Schipper manages to shape singular, outstanding scenes such as the piano episode.

September of Shiraz (Blair, 2015, 3.5)
No surprise that yet another film made by Americans about Iran proves to be shockingly off-the-mark about the realities of the country's history. Icing on the cake: Brody and Hayek are embarrassingly awful.

Dégradé (Nasser/Nasser, 2015, 7.3) (review)
That the film manages to convey the intricacies of life Gaza while remaining consistently entertaining is a significant accomplishment, and one that promises much more from the filmmaking duo.

The Treasure (Porumboiu, 2015, 8.4)
Porumboiu does what he does best; one very long, clever joke that lands with a bang in the end. The work of a true master.

Desde allá (Vigas, 2015, 7.8) (review)
"This is quite possibly the most confident film debut of any director in recent memory. Vigas studies societal hierarchies in Venezuela, the exploitative nature of the relationship between the wealthy and the lower classes, the deep-rooted effects of childhood trauma, the melancholia of loneliness and the fluidity of human sexuality, all within the parameters of the most sacred cinematic rule: show, don’t tell."

Sunset Song (Davies, 2015, 7.4)
Not as formally imposing as Davies' earlier works but this is a sturdy, stunning and inspired impression of the source novel. Ewan's abrupt character development is the film's biggest downfall. It feels unfinished against the rest of its subtle, patient buildup.

Francofonia (Sokurov, 2015, 6.7)
The scope of this film is either too limited or too vast to keep the audience engaged. The craft on display, and Sokurov's playful shifting between genres and media are very entertaining, but dulled by his monotonous narration.

Starve Your Dog (Lasri, 2015, 5.5)
As daring, formally, as it is uninviting, with a unique, highly stylized visual structure. The ideas are intriguing but nascent and underdeveloped. This is a very exciting direction for Arab cinema, though.

Evolution (Hadžihalilović, 2015, 7.0)
A haunting, eerie and unforgettable aesthetic experience. The allegory wears thin by the end, but the experience of the film isn't so much reliant on the story its telling as it is on the mood it conveys.

3000 Nights (Masri, 2015, 7.4) (review)
"Passionate, intimate and intensely moving, 3000 Nights is one of the TIFF’s great discoveries, and a film that is more accessible and entertaining than its premise might suggest on paper."

Youth (Sorrentino, 2015, 5.3)
Full of individual moments of brilliance, consistently funny and engaging in its first half and featuring two stellar performances from Michael Caine and Rachel Weisz, Youth eventually succumbs to the filmmaker's absurd tendency for grandiosity and aggrandizement.

Baba Joon (Delshad, 2015, 6.6) (review)
"Baba Joon’s storytelling and the emotional beats are familiar...When the story’s resolution is presented so neatly with a gift wrap, very little is left for the audience to ponder. Still, this is a heartfelt film of genuinely well intentions, with a sizable novelty factor, whose fresh look at ethnic minorities in the Middle East is quietly delightful."

Mustang (Ergüven, 2015, 7.5) (review)
"This is the work of a filmmaker whose understanding of form shows no sign of her relative inexperience, and her work with the young actors—all of whom more or less in front of the camera for the first time—is nothing short of miraculous."

The Pearl Button (Guzmán, 2015, 8.1)
Capturing the weight of history in droplets of water, in long forgotten words, in small pearl buttons. Simply sublime.

Dheepan (Audiard, 2015, 6.0) (review)
"What works to the film’s detriment is Audiard’s insistence on weaving the family’s narrative to the minutiae of the violence engulfing them. Some of these connections are simply nonsensical—Dheepan is threatened in one intense and seemingly momentous scene by a Tamil warlord, for example, but the subplot is never revisited—and others are merely muddled."