As you can see on the archive in the sidebar here, the past few months have been dire on Amiresque. I can bore you with explanations you didn't ask for, but the reasons for my absence can mostly be summed up in the simple fact that I found a new, non-film related job and working my writing schedule around that while maintaining a healthy diet of watching and reading proved to be a struggle. So I decided to give up on the writing bit for a while and focus on the watching and the reading; and I think most of you would agree that is the right call. Nobody wants a writer who is uneducated in what he's writing about and I'm hoping the short time off translates to a slightly smarter return. I'm hoping, anyway. 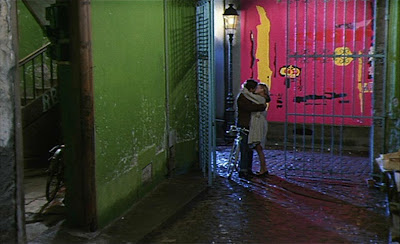 The new year is now only three days away and resolutions are being thrown around all over the place and part of mine is to write more. Enough is enough. Hiatus is over. The truth is that writing, in this space or other outlets, has always been a joy for me, not a responsibility, and if I want to keep my sanity I need to dive back in. Since there's virtually no better way to ensure you find the time to write than knowing that someone is waiting to read your pieces - that person being an editor with a deadline, a friend, the audience, whoever - I'm going to start this process of rebooting the blog by making a schedule for one of my favorite series I've participated in: Ryan McNeil's Blind Spots. I participated a few times last year and you can find those pieces here. The idea is simple: watch a canonical title that as a cinephile, you're supposed to have seen already but you never got around to, and then write about it. This happens on the last Tuesday of every month.

So here are my titles for the upcoming year. You will notice a heavy French emphasis (eight out of thirteen titles) and that's because I'm in the process of learning the French language and, as I've found out in the past few weeks, watching Francophone films really helps out. 2014 is going to be the year of French cinema for me and this list reflects that quite a bit. But I'm sure you'll agree that every title is one I should have got around to by now:

January: Stolen Kisses (Francois Truffaut)
I've seen a lot of films by Francois Truffaut, virtually all of them. He's one of my favorite directors. But there's something about the brilliance of The 400 Blows that has stopped me from watching the three sequels in the Antoine Doinel series, as if sequels can taint the pure magic of the original film. It's time to correct that now and satisfy the completist in me with the remaining entries in Truffaut's filmography.

February: Children of Paradise (Marcel Carne)
I have watched a lot of feminist films when I studied them back in school, though this seminal piece has strangely slipped by me. And I'm a Varda devotee too! Plus, one of my favorite current publications on film, the feminist quarterly called Cléo which Kiva Reardon started this year, borrows its name from this film. There are signs all over the place that this is my biggest blind spot of all.

March: The Philadelphia Story (George Cukor)
Fellow contributors at The Film Experience consider Katherine Hepburn's performance in this film one of the best ever put to screen. What better reason do I need to finally catch up?

April: Cléo from 5 to 7 (Agnes Varda)
It would follow naturally from my first choice that Children of Paradise, a film Truffaut reportedly once said he would give up his entire filmography to have directed instead, be my February entry. This one is regularly present on lists of the greatest French films of all time.

May: Farewell, My Concubine (Chen Kaige)
It has always bothered me that the Cannes jurors managed to share their Palme d'Or between two films in 1993 and still didn't find room for Mike Leigh's greatest film, Naked. Fine, The Piano is superb, but can Farewell, My Concubine really be better than Naked? Time to find out, I guess.

June: Les Diaboliques (Henri-Georges Clouzot)
I could have gone with any film by Clouzot, whose work I've embarrassingly never encountered. This one seemed like the right place to start.

July: Ordet (Carl Theodore Dreyer)
A dear friend of mine, whose opinions I trust with utmost respect, recently told me that this is the greatest film ever made. Having seen films like The Passion of Joan of Arc, Thou Shalt Honor Thy Wife and Vampyr, I wasn't surprised to hear that about a Dreyer film.

August: The Piano Teacher (Michael Haneke)
A relatively recent entry but Haneke is one of the absolute best directors working today. Every one of his films that I've seen has impressed me greatly. And Isabelle Huppert, an actress whose career is not at all short of magnificent performances, seems to have given her best one here by most accounts.

September: The War Game (Peter Watkins)/Night and Fog (Alain Resnais)
Yes, I love documentary cinema. Yes, it's embarrassing that I've never watched either of these two films; but that's the point of this series. Better late than never.

November: A Man and a Woman (Claude Lelouch)
The final French film on the list is yet another Palme winner (and a foreign-language film Oscar to boot, too!) Lelouch was never one of the main actors in the nouvelle vague so his films haven't been as closely studied as the other marquee French directors of the era. Still, this is a pretty massive blind spot to cover.

December: It’s a Wonderful Life (Frank Capra)
I can argue forever that Christmas isn't as big an event in the culture I was raised in as in North America, but that doesn't excuse the fact that every year I flip through channels on Christmas day and skip past this one. 2013 was the last year I did that. I promise.
Posted by Amir at 12:57 PM